MIS IB Diploma students take part in our CAS programme (Creativity, Activity & Service). As part of this, student carry out activities and reflect on them.

Here is an article written by Audrey, one of or DP1 students.

MIS has ended Semester 1 and to celebrate this, and the amazing results of MIS Got Talent we have released our end of semester Showcase. Please see the video here.

Today MIS announced the appointment of a new Head of School for August 2022. See the video announcement here. 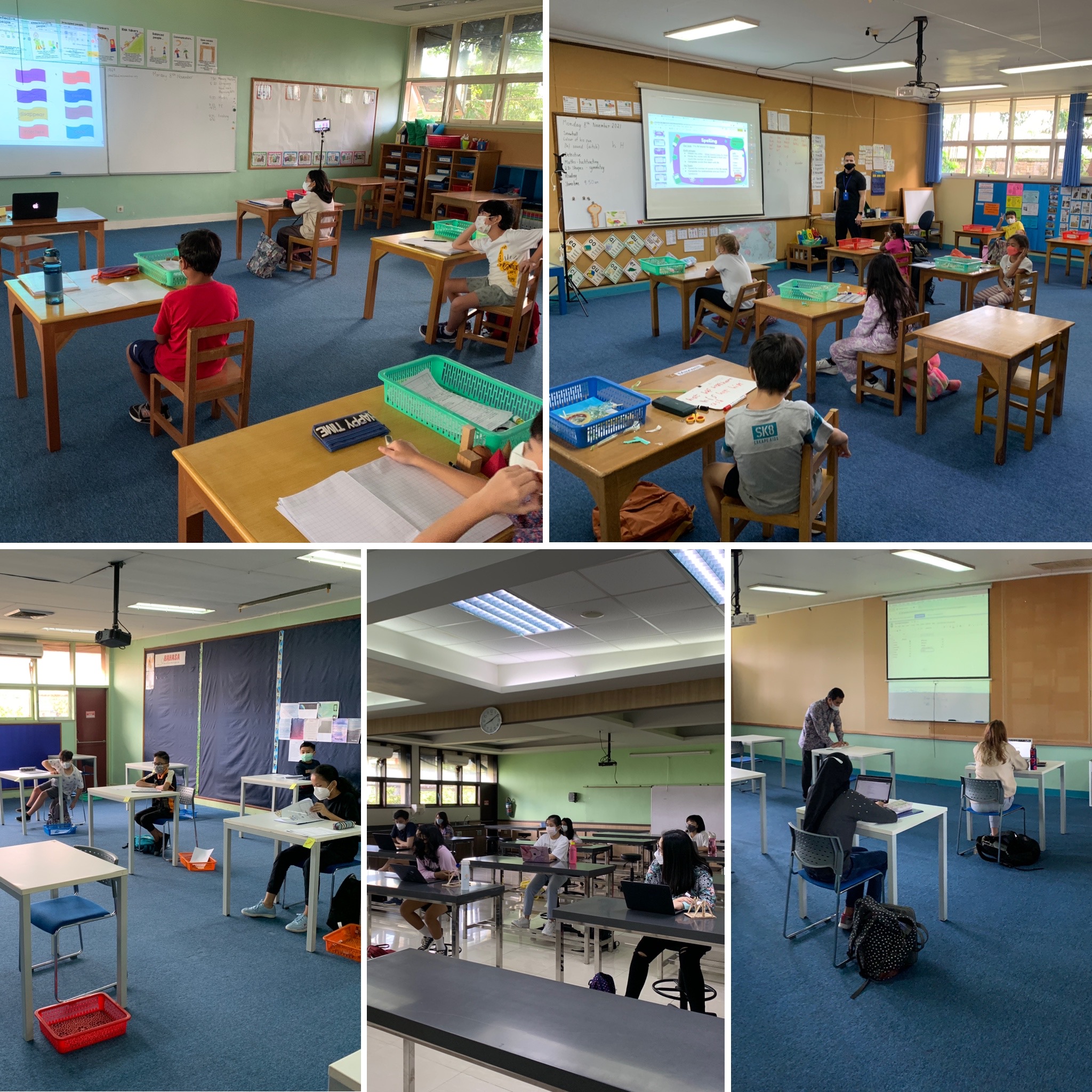 After 300 days of online lessons, we have welcomed back our Grade 1 through Grade 12 students for face-to-face lessons.

Masks could not hide the smiles of excitement! 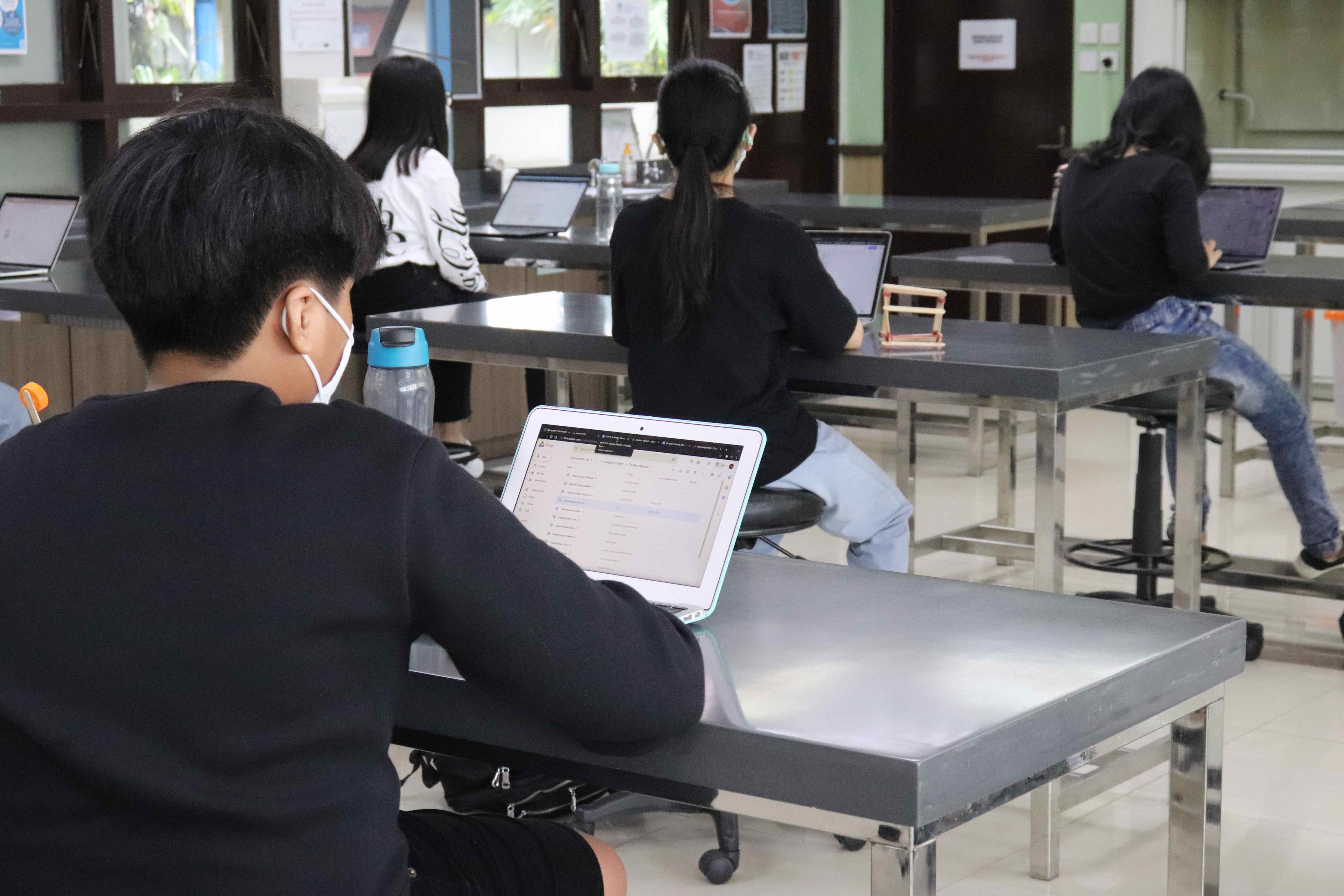 Today saw use welcome back our MYP and DP students to campus for their first face-to-face lessons for over 20 months.

Over the past week MIS 'virtually' welcomed a team of visitors from WASC (Western Association of Schools & Colleges), for an accreditation visit; this had been postponed from April 2020. I am pleased to report that the team were extremely impressed with what they saw, especially in the realm of online learning. Indeed one of the visitors noted that after a difficult year of teaching, visiting MIS was "reenergising"; there is no better endorsement. As a result, their report detailed eight commendations and no recommendations.

Well done to the entire MIS community for their collaborative efforts.

As we brought Term 2 to a close and schooling for 2020, we also closed our voting for MIS Got Talent for 2020. Thank you to all those students and staff who demonstrated again that MIS really does have LOADS of talent!

MIS has released a video to review the year 2019-20. This replaces the yearly parent event where the school reviews the previous year.

The video is available here

Everyone at MIS wishes the community a fantastic independence weekend.

Please see a short video from one of our students in MYP: https://youtu.be/nMbDZu-3qzI

On Monday 10 August 2020, MIS started the new school year with a whole school virtual assembly. It was amazing to see so many familiar faces, but also many new ones.

We wish everyone a fantastic start to the new academic year.

As we have now reached the end of the 2019-20 school year, everyone at MIS would like to wish the school community a very happy holiday!

On Thursday 18 June, MIS celebrated the end of the 50th year with a virtual awards ceremony. This gave us the opportunity to praise our stduents across kindergarten to Grade 12, for their achievements throughout the 2019-20 scholl year.

This is a week of firsts: we have reached the end of nine weeks of home-learning, with just two days remaining; we have also reached the end of what would have been the IB Diploma examinations for our DP2s.
Today would have been the last examination for Angeline and Mayvelynn (Chemistry Paper 3). As you know the IB cancelled all examinations and they will be awarded their IB Diplomas according to internal assessments and predicted grades.
As a community we would like to celebrate the success of the second cohort of graduates from MIS. Our staff and students have recorded messages for our graduates, which we share below. I am sure you all join us in congratulating Angeline and Mayvelynn on their great achievements. Our graduates have also recorded messages of advice for our students and the whole community; at a time of uncertainty they are a shining light of hope and of the future of the world.
Please see virtual graduation message here: https://youtu.be/C-Bn2pFPeik

MIS hosted the first 'Virtual Assembly', celebrating the activities students have been engaged in during the past eight weeks of home-learning. 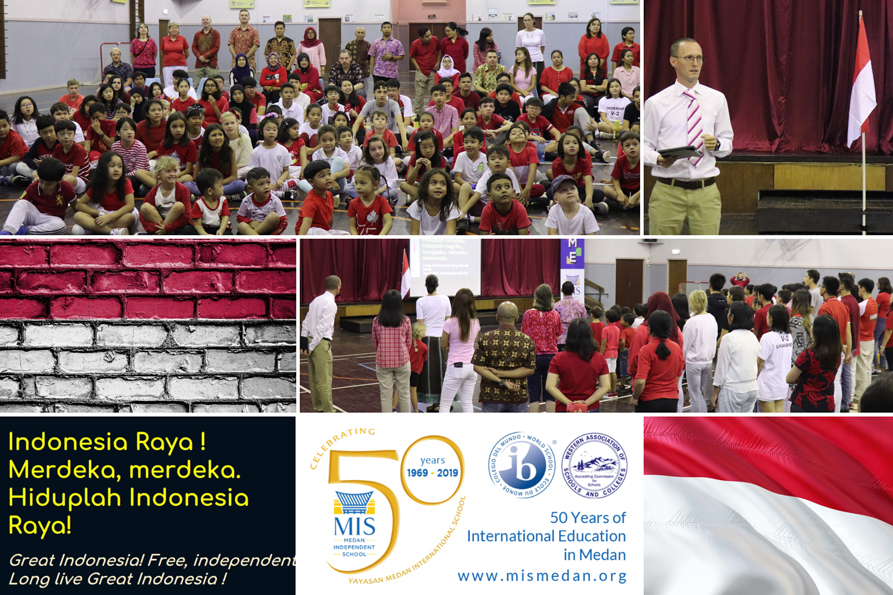 MIS held its first whole school assembly of the year today, celebrating both the start of the 50th year of the school and the 74th anniversary of the birth of Indonesia. It has been fantastic to see so many familiar faces return and also welcome many new students and members of staff.
We are looking forward to an exciting and busy academic year. 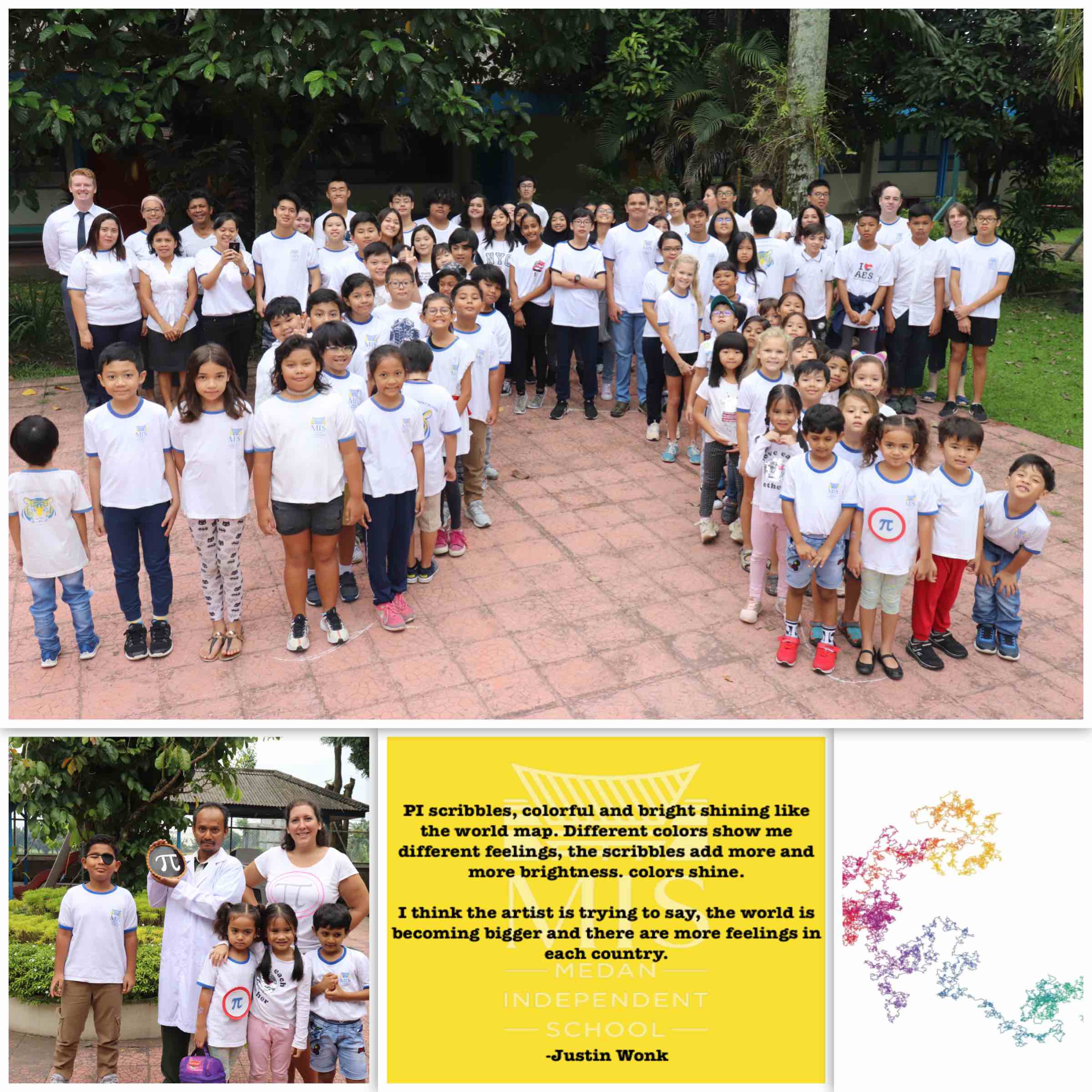 Each year at MIS teachers choose to do special math-related activities on March 14th as in the American notation 3.14 (March, 14) is written like the PI numbers. It is also Albert Einstein's birthday. We at MIS chose to support the STEAM subjects. Some classes read the book Sir Cumfrence and the LIfe of Pi, some classes did pi-soduku, some classes wrote Pi-Ku poems, some classes learned how to figure out the ratio on various circles..... It was a great day of eating Pi and learning about math!

Top picture: This year was especially fun because we asked the students to wear their white MIS shirt and we took a PI day photo of the students! Turned out pretty well!

Bottom left picture: Albert Einstein's birthday as well as Pak Iwon's birthday. So we dressed Pak up in a lab coat (He already has the gray hair) and got a PI cake. Iqbal posed for the picture as a Pi-rate and Noer and I (Rachel Wayne) had Pi shirts on. We each celebrated this fun math day in different ways :)

Next two photos: The pi inspired poem written by Justin was his first attempt at ekphrastic poetry. He looked at a piece of art done for Pi day (it is pi to 1000 by artist Nadieh Bremer). Justin was taken by this piece and was able to write about it. 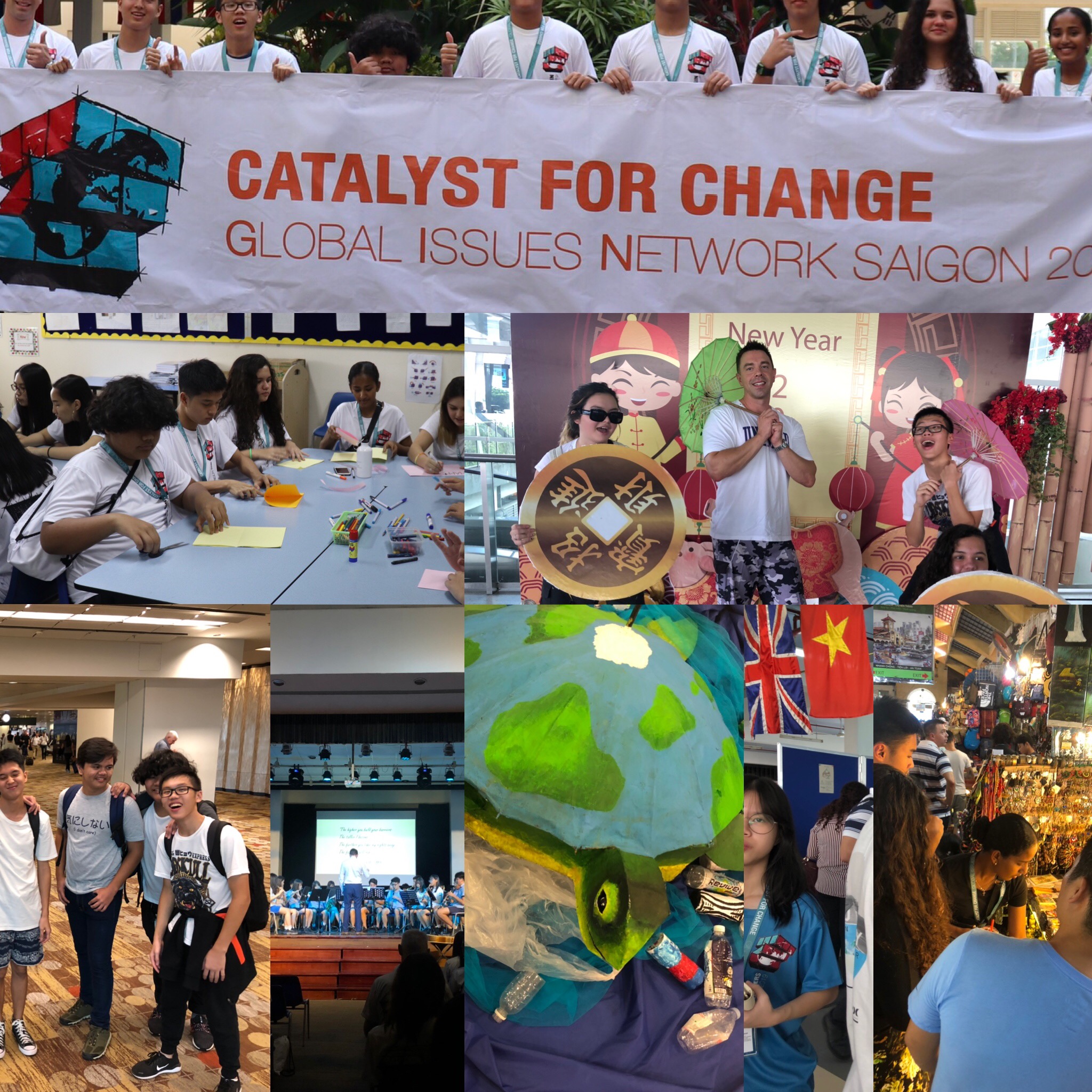 The Global Issues Network team has spent the year fundraising to help out local refugees in Medan. Students have also visited the residence of the refugees several times this year to teach English and Math lessons, as well as play games with the children.
Each year the GIN team attends an international conference to participate in workshops and share their local initiatives with students from other countries. This year, the venue was in Saigon, Vietnam. The 3-day conference was a great opportunity for students to come together and discuss, debate and create project-based sustainable solutions about the global issues that they are passionate about. This year's conference theme was "Catalyst for Change" and had students share ideas on how to address such issues as environmental degradation, education for all, and wealth disparity.
There were also a number of key speakers that included professionals in the field of animal conservation, public health, and environmental initiatives.